Some snapshots from the Militantesthetix photo album ... 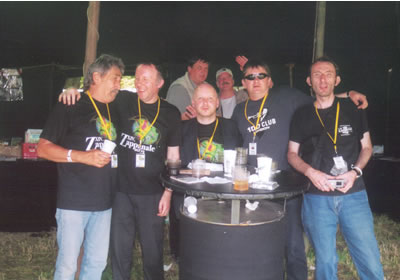 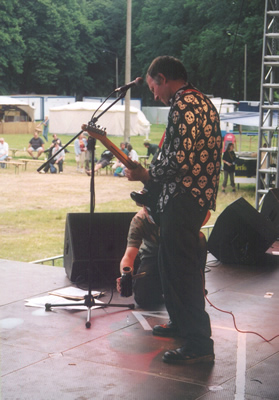 Mark P strums a blow for motherhood and covers "Why Don't You Do Me Right?" (this ultra-rare B-side appeared on ATV's debut album The Image Has Cracked in 1977) and "Plastic People" (all punks know the chords to "Louie Louie") ... proving that REAL punks all saw the point of Zappa ... 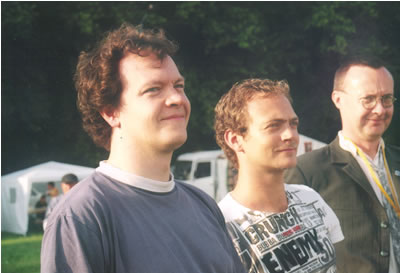 Hjarne and Soren from Copenhagen with "honorary Dane" Ben. Preben, the reason why the lecture on Zappa and Hegel contained quotes and a "decollage" by Danish painter Asger Jorn, seems to have gone to get the beers ... Jimmy Carl Black and Dr Eugene Chadbourne, the Jack and Jim Show ... captured in full 35mm glory by Esther's camera (no pics of the Muffine Men as Roddie entrusted her with the Muffin camcorder for a three hour filmathon - and then absconded with the DVCassette) ... here are some snaps from Ben's "spy" wristwatch camera in spooky secret-agent black-and-white ..

Shortly after he'd spoken on Zappa and Hegel, Ben Watson was told by Roddie Gilliard of the Muffin Men - in no uncertain terms - that he would read a one-minute poem during the Muffins' rendition of "King Kong" the next afternoon (enforced critical participation, denizens). Donning his role of "Out To Lunch" (anti-poet and unreconstructed punk), Watson scribbled down the following text backstage on Saturday at lunchtime, fuelled by nothing more than his first beer of the day, a lard sandwich, and the bizarre improvised English of the menu on display in the musicians' hospitality tent ... it's here because leading Zappalog Andrew Greenaway, imagining he'd heard the words "women's farts are boring", wanted to eyeball a lyric sheet.

Triple-dot time in a 6/8 contraption, descension of melody in skiphop declension, waiting for the parallel giant steps of back-to-the-summit. Apeshit surround sound to announce specificity of chaos intrusion, where anything can happen in the metabolic pool. Met a bollocks in the pool hall where the Rundfahrt is boring, playground slipshod, an umbilical see-saw. Severance eye is a bendy optic, the open-face gem covered in lard, hard parts extra. Peanut butter candy! The chewy Carmel Center of politics as a branch of the entertainment industry. Progressive rationalization of divided time demanding a gawping programme made of unbedenkbaren Klistierspritze!! The Fußpfleger screams for a cornershop moment, where'd you put that Schmaltz-Putz sandwich? Errand dipstick in show-room froth, freckles on the heaving sweatback, curly crudit‚s of sabotaged excellence. Fast limitless bound by the frame of a firm, tight bottles squeezed by a Green Dream. Tabula rasa, pell-mell non-grata, the grits hipped to pipstop stagetime twankbar "recalculation". Limbic memory of muscular musics, brown brass studded with Doberan textures. Wellwishers who queue to sample a saucepan, in kennedy tatters with tartan potatoes, strips of flesh writhing in the contemporary pancake. Blast of bless like Martin Smith's sainted trumpet, petals uneasy from postscripts in pots: billious tubules and scandalised banjos, sojourns nabbed in a humid place-mat. Fast tooth and locket, lip salve in the engine grease: lube trick bananas in a 3-arf hosanna.

After the Muffins' set, which naturally wowed the crowd, Maestro Gilliard scalded the reluctant poet for having overstepped his minute limit. Out To Lunch's excuse was that the aforementioned text would've lasted precisely 60 seconds if he'd read it in his planned gabble, but Eugene Chadbourne's guest banjo plunkings kept casting their spell his way, making him pause to listen. 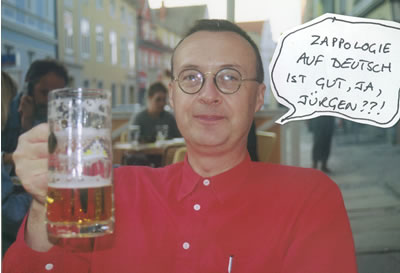 Ben Watson studies the material substructure of the Hegelian dialectic ...